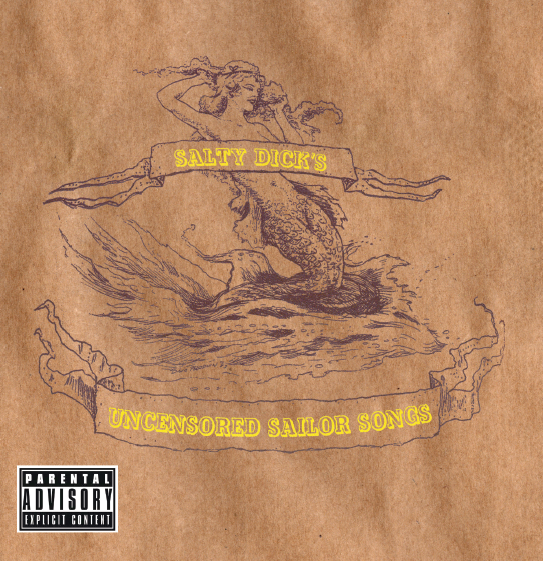 Banks of the Sacramento

This comes straight from the mouth of Stan Hugill, the great sea song collector, who was a chanteyman on square-riggers himself. I collected this during a famous workshop at a Mystic Seaport Sea Music Festival in the late 1980s.

A Royal Navy song, the subject of which is “the love that dare not speak its name.”

This widely known song has verses that are interchangeable with those of The Good Ship Venus.

A bowdlerized version of this pump chantey is to be found in F.P. Harlow’s memoir Chanteying Aboard American Ships. It’s a 19th-century musical setting of a joke that’s still in circulation today.

From the Canadian Navy. I recommend accompanying this song with the old sailor’s libation called a dog’s nose: a shot of rum or gin mixed in a pint of ale.

Johnny Come Down to Hilo

This version of the chantey takes a look back home at the girl left behind (which reminds me of this alternate reading of a verse from the chantey South Australia: “Well, there’s just but one thing grieves my mind, to leave Miss Nancy Blair’s behind.”

This version comes from Australia. For the non-Aussie listeners, a “Pohmmy’ is an Englishman, the term coming from the acronym POHM – Prisoner of Her Majesty – which was the designation of many of Australia’s original settlers and which took on new meaning once Australia gained independence from the crown.

The Whores of Sailortown

I recently collected this in the field. It highlights the truly global intercourse of the windbag sailor.

Collected by Hugill and found in his book Shanties from the Seven Seas. His notes state that this is one of the few chanteys that dealt with homosexuality.

A song about an unusual seamen’s bethel. The tune is the beautiful traditional English song The Farmers Boy.

An ancient song first published in 1620. Some versions have a lobster starring in the crustacean role.

A Matlow Told Me

One of the more misogynistic numbers in this collection. Matlow is the British spelling of the French word for sailor: matelot. FYI: “wren” is the word used for a member of the Women’s Royal Navy (WRN).

Because of his status as “explorer” we tend to forget that Columbus was, first and foremost, a sailor. This song dates from the late 19th century.

A chantey from the days of the nitrate trade along the west coast of South America. Serafina must have been quite a gal.

Like so many dirty songs, this one is set to a familiar melody. And like so many sailor songs, it contains some advice for the listener.

Touching on the eternal rivalry between land and sea military forces, this British song is a classic.

An old song, probably of naval origins, in which the swab loses both possessions and health.

Collected from an ex-US Navy sailor, and one of my personal favorites.

A conglomeration of parts of several versions of a World War II classic, this represents the naval and merchant marine view of things.
Buy CD

Here is a collection of songs as Sailors sung them: bawdy, raw and uncensored. Not for the timid or prissy, these are examples of the entertainment seamen past and present created for themselves. Some are in the form of chanteys: work songs from the sailing ship era. These include rare unexpurgated versions preserved by the late Stan Hugill, who sang many of these himself during his days as a windjammer sailor in the early 20th century. Also included are songs from the Royal Navy, the Canadian Navy and the U.S. Navy, covering a span of years from the 19th century to today.

This is material that most folklorists have passed over and which is still transmitted today as all songs were at one time: by word of mouth. Whether you are a student of traditional song, a lover of maritime lore, or just enjoy a good dirty song, you’ll find something of interest on this recording.

Sailors, like any exclusively male community, have probably always sung “dirty” songs. Even a cursory perusal of the available literature reveals ribald songs from cowboys, soldiers, rugby players, boy scouts. The available literature is scanty, however, since few folksong collectors preserved material of this nature. It is, therefore, one of the last branches of folk music that still relies primarily on oral transmission. If you want to learn songs that deal frankly with sexual themes, find a group of men without the company of women, open up a bottle or two, and stay close until the singing begins.

For seamen, the enforced abstinence of sea voyages created a pressure that found an outlet in the singing of bawdy songs. Much material has been lost to us, but there remains a small body of song of maritime provenance that is still pure and unbowdlerized. It is my intention with this recording to preserve a few of these gems, to probe this back channel of sea music. These are songs from both the merchant service and naval tradition, songs of long ago as well as of today and songs from all corners of the English-speaking maritime world.

I have collected this material from a number of sources. From the great Stan Hugill come uncensored versions of well-known chanteys. From Jerry Silverman’s invaluable work The Dirty Song Book come a number of rude songs. From musical confederates of mine come various impolite ditties. And from friends who served in the seaborne military services of Great Britain and the United States comes some of the most disgusting material of all. I thank them all, and dedicate this work to the memory of the men of the sea who found a lightening of their burdens through the uplift provided by a choice naughty song.